THE BEST ALARM AND SEAL FAIL DETECTION ON THE MARKET

Since 1988, Multi-Tech Solutions (a division of PumpCon International) has been manufacturing the MOS series protective relay for pump over-temperature and seal fail detection in most all brands of submersible sewage pumps.

The various MOS Series Models can combine detection of circuit combinations for motor and bearing over-temperature and seal failure in a single plug-in unit. In an alert condition, the appropriate LED is illuminated and relay contacts associated with the condition toggle. Thus a load such as the motor contactor may be turned off, or a warning light might be turned on. Upon the occurrence of the first alarm condition, the proper LED will illuminate a steady alarm indication. If the alarm should clear, the LED will then begin to flash, so that the operator will know that at least one alarm occurrence has been detected, and cleared.

A low voltage supply provides power to the over-temperature and seal failure monitoring circuits which control relay outputs based on instructions contained in a microprocessor. The microprocessor circuitry includes power on reset and oscillator start-up timers as well as an independent watchdog timer to insure reliable operation.

A test push button simulates both the over-temperature and seal failure status in the pump seal chamber, and a Reset push button clears the alert indicators after (1) The Test push button has been depressed, or (2) an actual alert has been corrected.

To prevent dislodgment of the module it is designed to be mounted in an industrial type 12 pin socket with hold down clip. 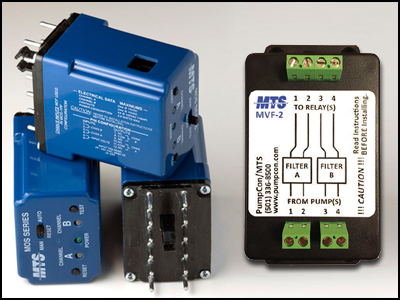